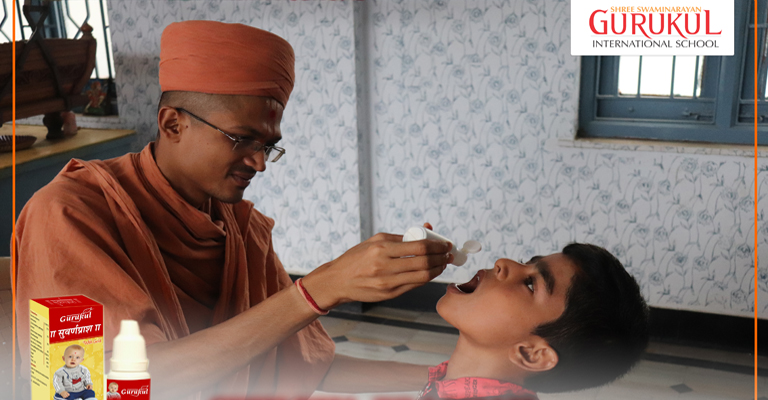 Suvarna prashan samskar is one of the 16 essential rituals described in Ayurveda for children. The process in which Suvarna bhasma (purified ash of gold) is administered with fortified ghee prepared with herbal extracts, and honey in liquid or semisolid form.

When Can Suvarna Prashan Be Given :-
Suvarna prashan can be given to the age group of 0-16 years.
It can be given daily early in the morning between 6 to 9am on empty stomach, or at least on every Pushya nakshatra – an auspicious day – which happens to come after every 27 days, given on this day it bestows excellent benefits.

Time of Administration :-
Suvarna Prashan can be given daily early in the morning, or at least on every Pushya nakshatra- an auspicious day which happens to come after every 27 days, given on this day it bestows excellent benefits.

Can It Be Given to Special Children?
Yes, Suvarna Prashan can be given to special children. It has shown improvement between 10-25% among many special cases in which Suvarna Prashan was given as a daily dose for 1yr. The children were found to have significantly fewer complaints of digestion, temper, irritability & sickness. It was seen in a few children to reduce the episodes of seizures.

How Does Suvarna Prashan Works :-
According to Ayurveda, since Suvarna Prashan contains Suvarna Bhasma it helps to enhance the effects of other medicines it contains like Bramhi, Shankhapushpi, Amla, etc. It helps in improving Immunity, Intellect, Grasping Power, Body development, Brain Development, Neuro-Musculo coordination.

Ancient Reference for Suvarna Prashan :-
The reference comes in Kashyap Samhita as follows :-

Shree Swaminarayan Gurukul  believes in transforming children, who will shape the future world. It transforms the lives of students with the unique value framework of Vidya, Sadvidya & Brahmavidya

Vidya : stands for Modern Education, which develops the values like Leadership, creativity, knowledge, curiosity, and dynamism amongst other values within the students.

Sadvidya : Stands for Traditional education, which develops values like gratitude, integrity, non-violence, empathy and breaking down bad habits within the students.

Brahmavidya : stands for spiritual education, which develops the values like faith in God, devotion to God, deep affection with saints, non-attachment, self-realization, and God-realization within the students.

8 thoughts on “Suvarna Prashan Camp, An Ayurvedic Immunization for Children”