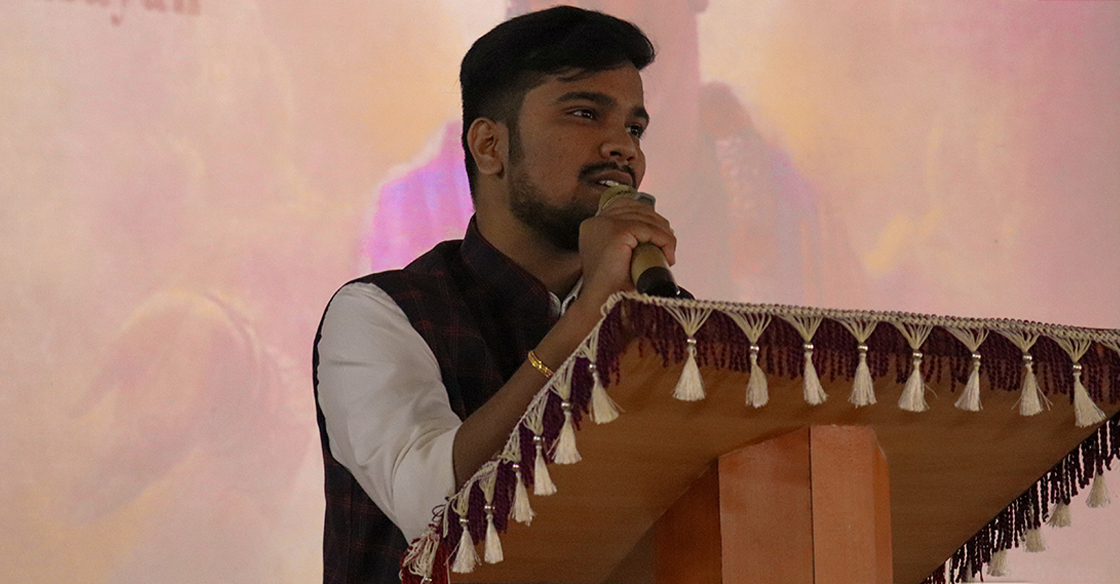 Only few people on this planet remember origin of their success journey. After getting the huge success in his life Akshay Chaugale is one of the students of Swaminarayan Gurukul international school Kalaburagi. After becoming one of the top young scientists of the world, visited to school and recalled all his journey of success in the campus among the young children.
Akshay Chaugale born and brought up in a middle-class family and his mother is a high school principal of a government school. Akshay completed his schooling in chittapur taluka in a Kannada medium school. In his schooling he was very much interested in science subject and by seeing his interest in the science subject and also his performance in the school his father decided to join him in a school where he can get the sanskar as well as is the good education. one of his relative had referred to Swaminarayan Gurukul international school and explained about the culture and education provided here, immediately at the drop of a hat his father joined him in 11th standard to Swaminarayan Gurukul international school. within no time Akshay is able to adjust with the friends and to the environment of the school because of the culture which thought in the school and also the personal care by the teachers given to the students. Opportunities which are provided in the Gurukul like to speak on the stage, PPT presentation and also to show the creativity of the students in the Gurukul expo conducted every year. As he is already having interest in the science subject he grabbed the each and every opportunity which is provided by the Gurukul school, in the Gurukul expo he prepared his first ever project in his life as an ATM machine and he gained so much of experience and also appreciation in that Gurukul expo for the perfect presentation and creativity. This given him enough encouragement, confidence and go ahead with the research to the best of his knowledge.

He continued his research work in engineering as well as he was interested in science and technology. In the different fields of science like robotics, automobile engineering, mechanical engineering and also try to research in all the fields of science by his dedication and creativity. His professor Dr. Rao is so impressed and given him scope to do the research in his lab because of which he is able to continue his research and the ATM project has taken into reality which is appreciated by the government of India under digital India program. Also prepared a Multipurpose agriculture robo which can be utilised in the modern agricultural to sprinkle pesticides automatically, Automatic wheel chair useful for handicap people which is controlled by motion of a person. The proudest moment for the gurukulites is that Akshay got an opportunity to work in ISRO for Gagan Yaan-II. Published many papers including in elware and tailors. Presently

Mr. Akshay is working to increase the efficiency in which he already achieved the engine efficiency up to 79% which is approved by Govt. of India.
On…….. Date is an unforgettable day for akshay because after great achievement he selected as a world’s best young scientist. In the top 10 scientist list he stood in the ninth place. After that for that he was invited for the different countries for the demonstration and share it to the students globally.
This good news first he wants to share among Gurukulites for that he came to school campus and took the blessings of Rishicharandas swamiji the branch Swaminarayan international school Kalaburagi and all his teachers. He also shared his experience in Gurukul and never forget the secret of his success mantra which he learnt in Gurukul that is “ Hard work + prayer = success.” He also told all the students that sanskar and giving respect to his elders parents and teacher are the most valuable things that he learned in this campus. The opportunity he got to expose his talent in Gurukul expo on the birth day of APJ Abdul kalam Oct 15,2015 where he presented his first working model as an ATM machine which is given him the enough encouragement and success to continue is journey in the field of science and technology. Now he got the opportunity and appreciation from digital India which is providing him enough money e and encouragement to continue his research. He also appealed Govt of India to install his first digital ATM in SWAMINARAYAN INTERNATIONAL SCHOOL KALBURGI. Where his first project was born.
At last he suggested the young minds of Gurukulites that
” learn the sanskar and need to grab the opportunities which are given by the school for presenting your skills and also explore your knowledge then success will be at your feet”
“I am an ordinary student from the middle-class family only with sanskar and hard work I achieved my goal in a short period of time. In the same way you are all having the facilities for doing whatever you want so get the opportunities from the Gurukul and enjoy the success. If you work hard now you will enjoy in the future these are the golden words repeatedly told by the Akshay Chaugale for his younger brothers.” 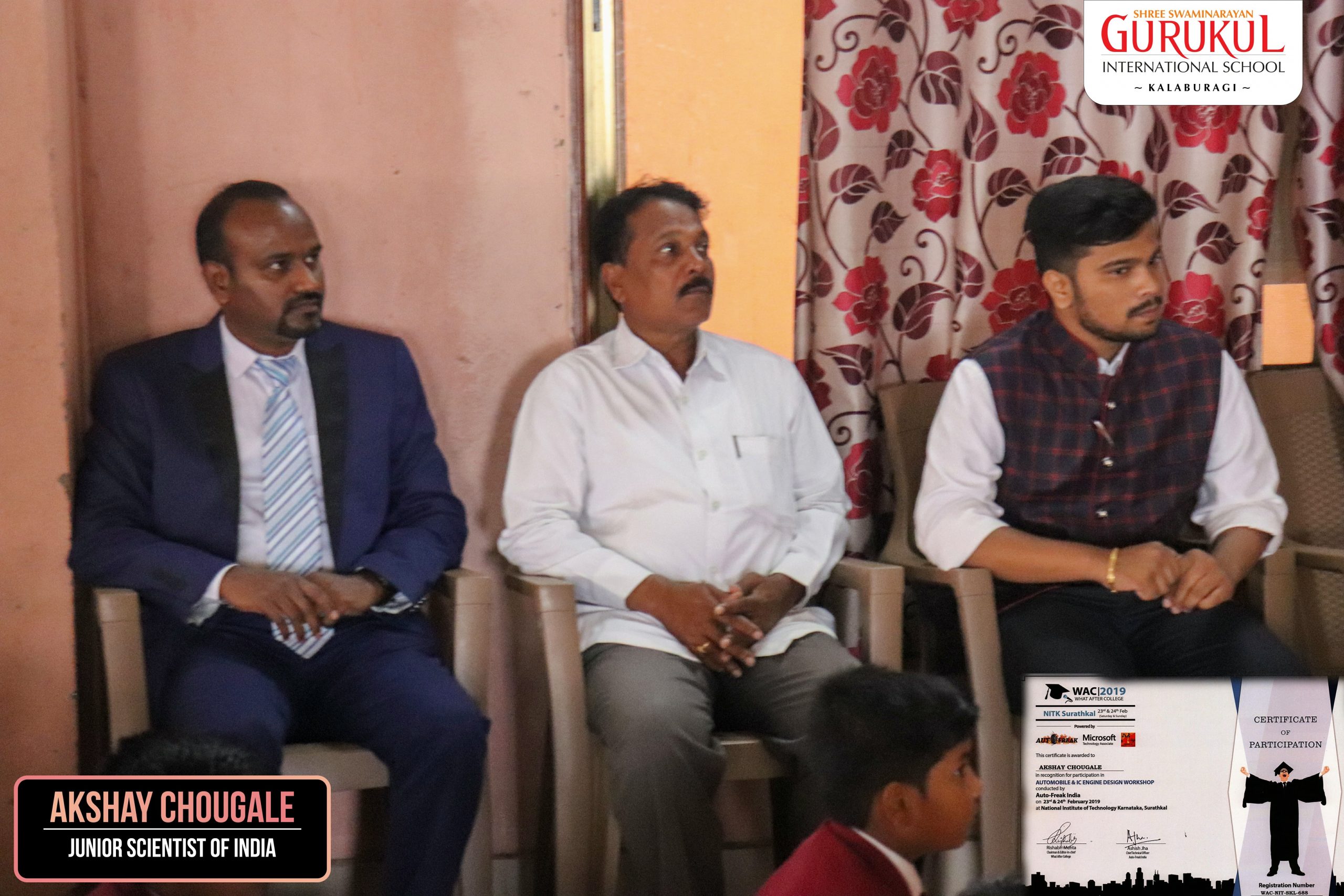 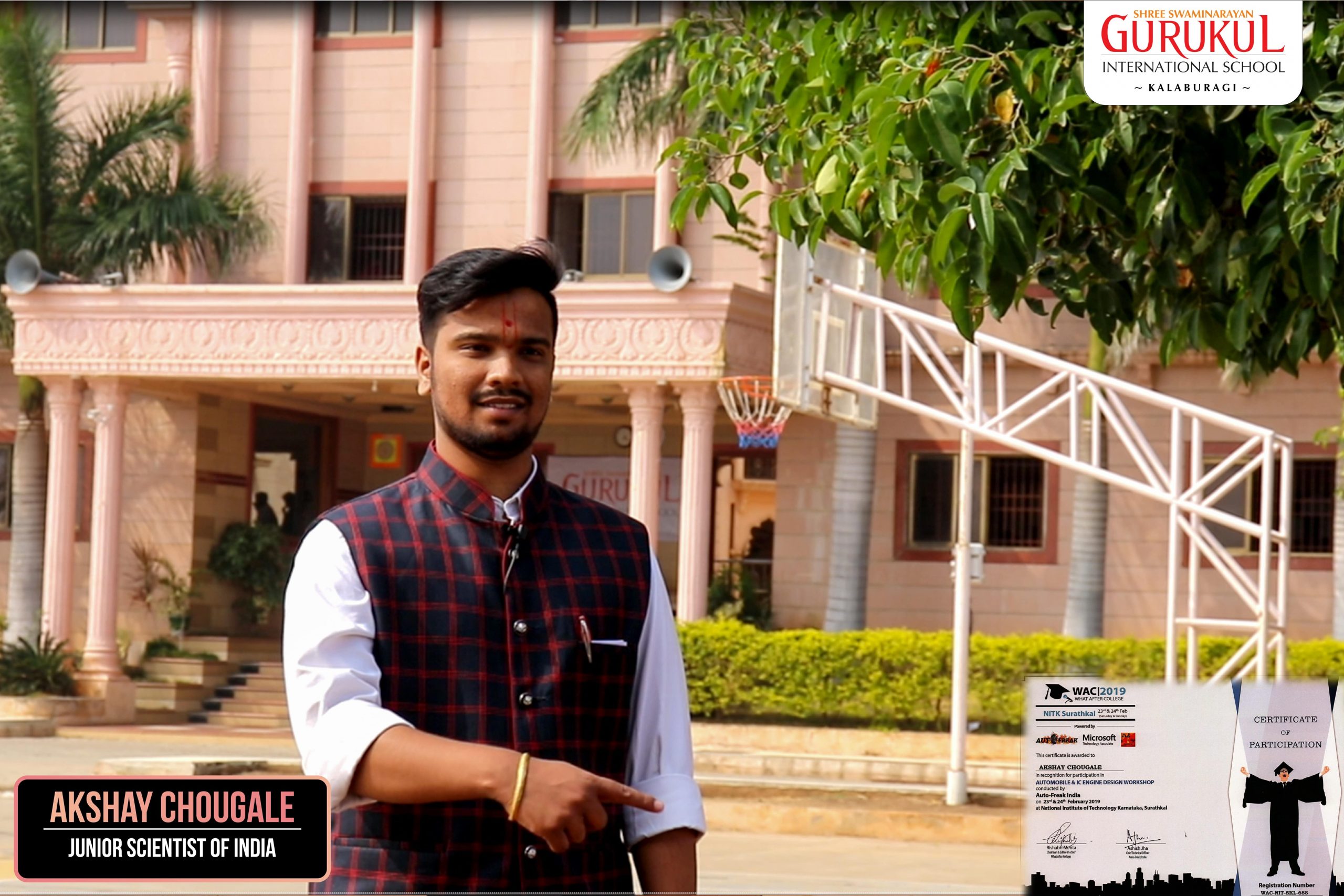 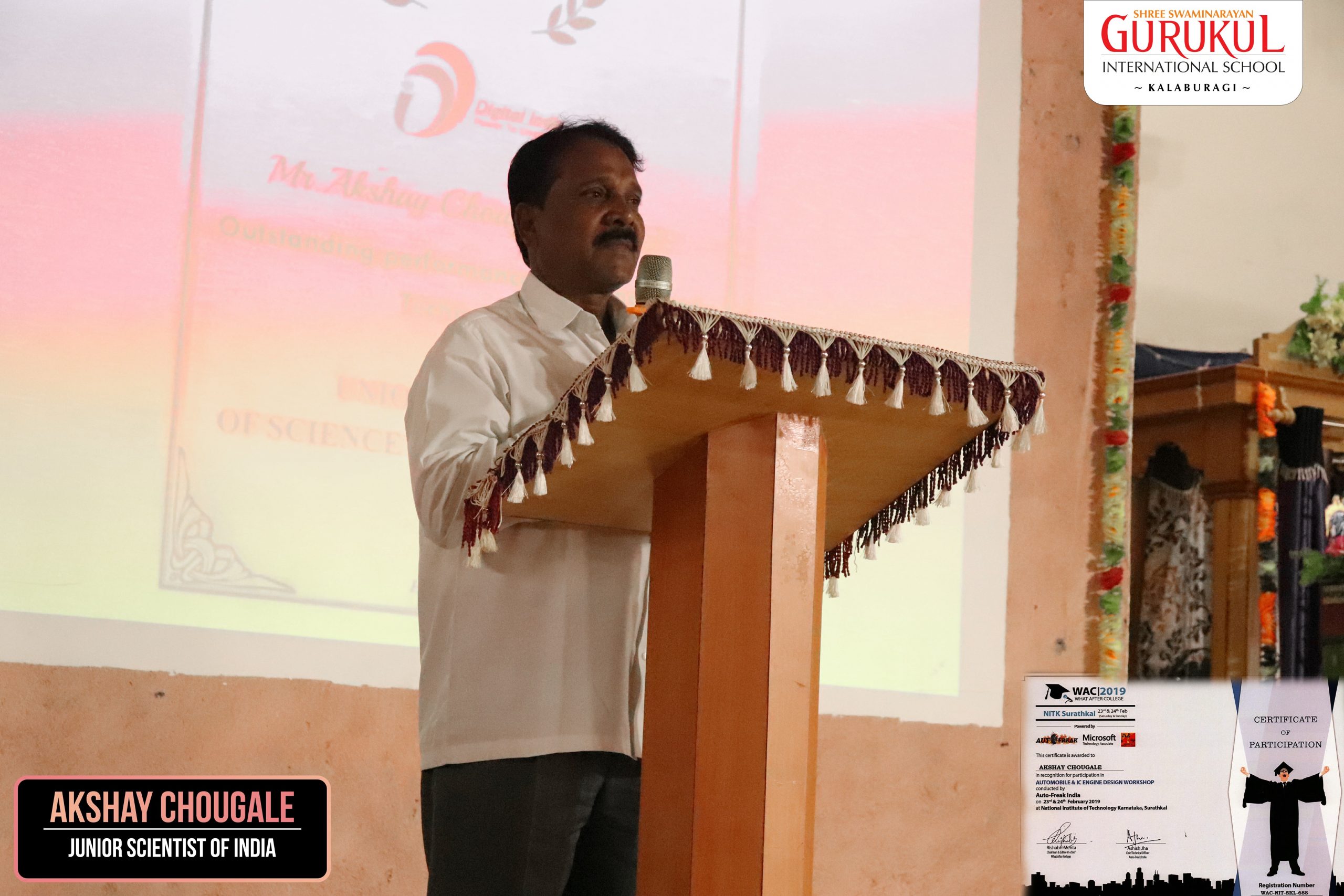 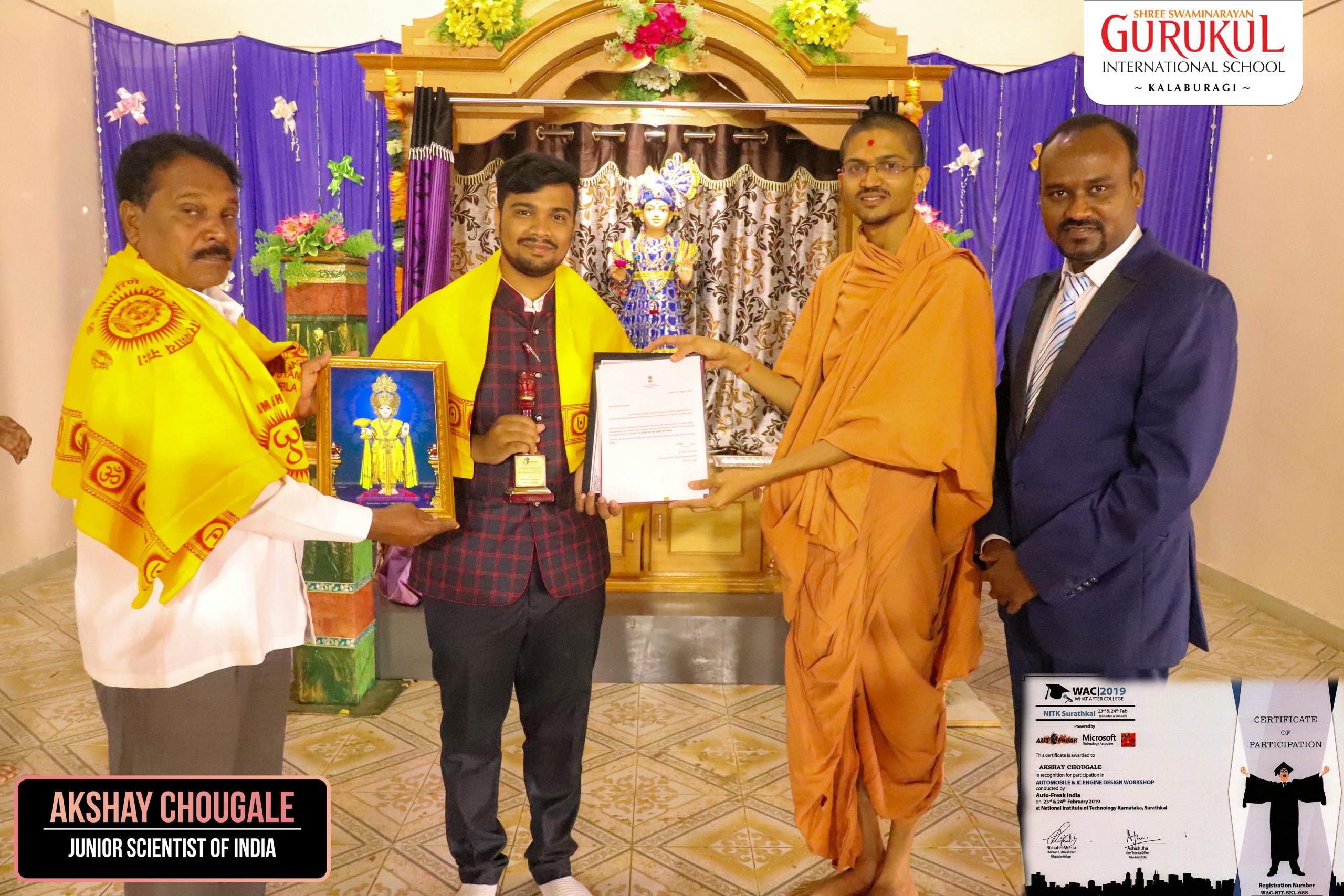 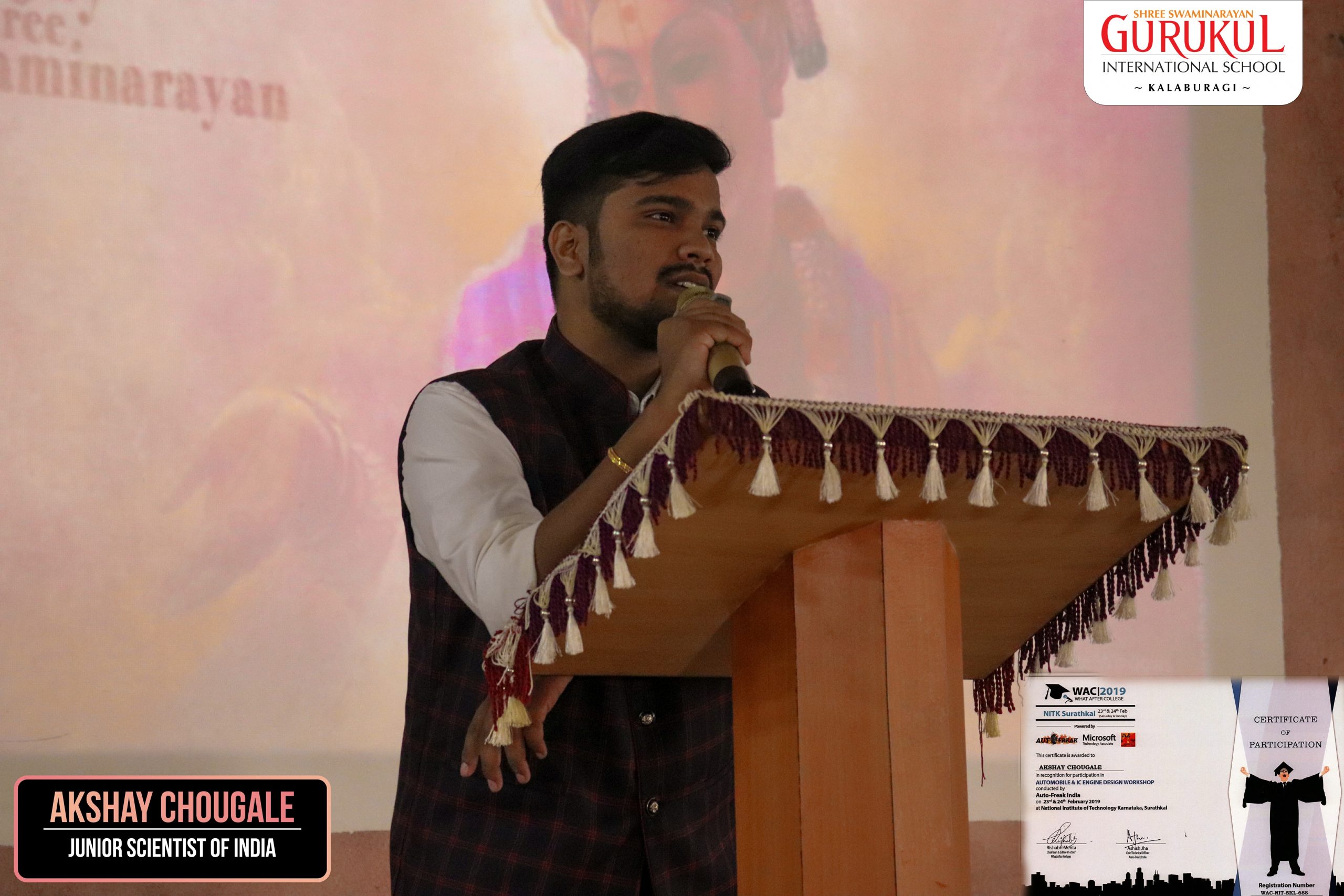 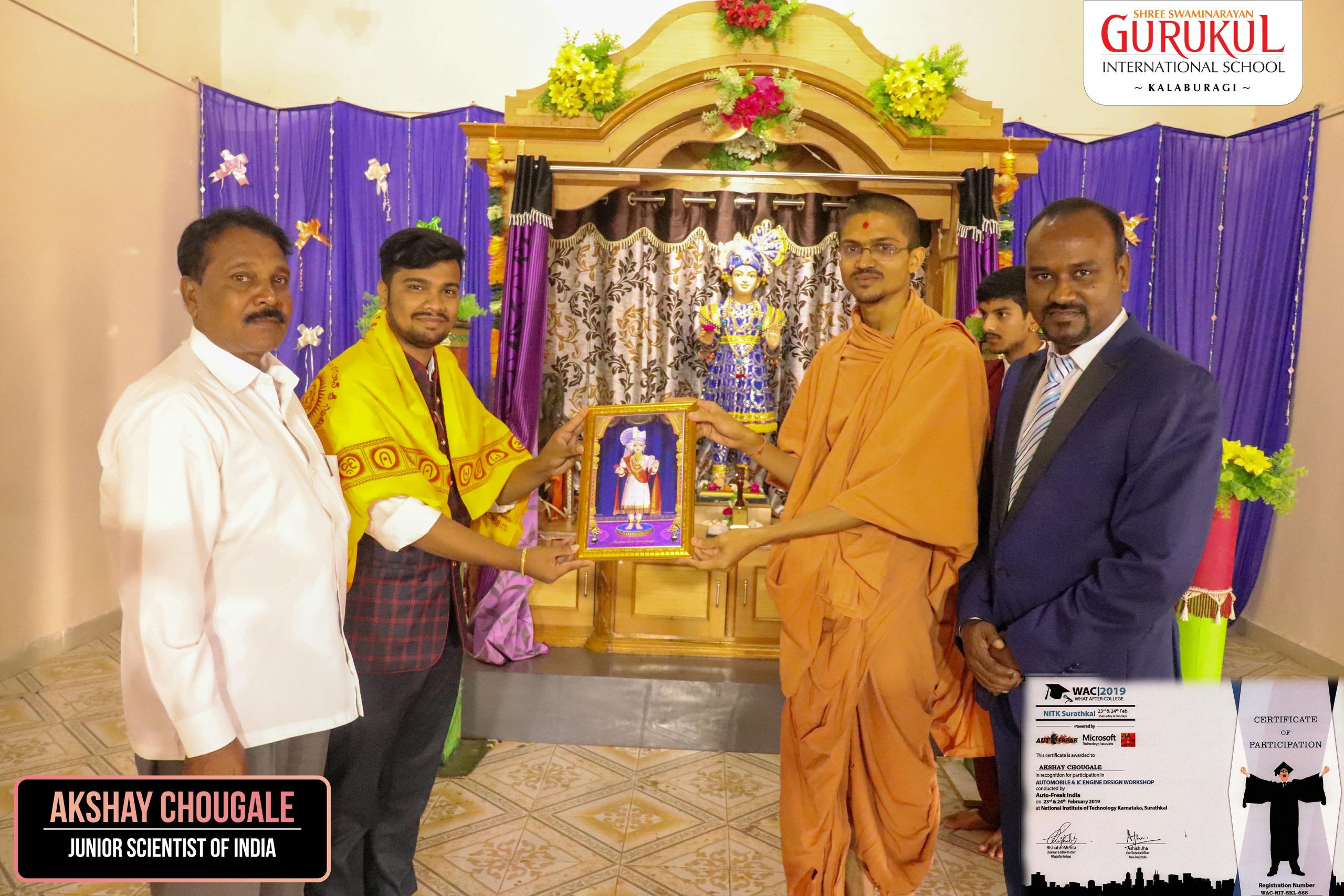 One thought on “Young Scientist of the India Akshay Chaugale”