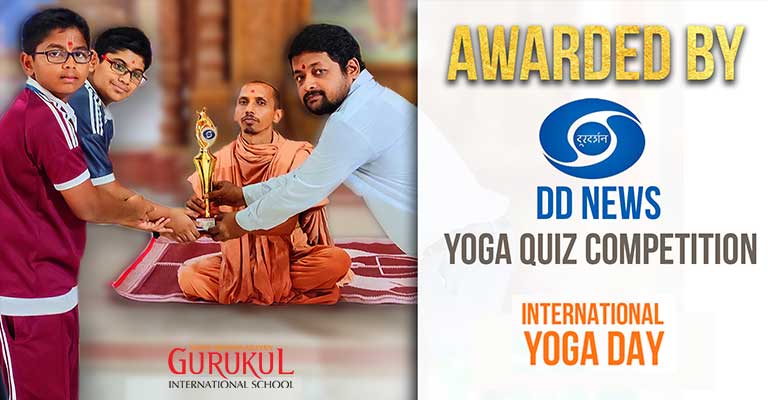 Yoga : Connect With Your Inner Self

Yoga is an ancient physical, mental and spiritual practice that originated in India. The word ‘yoga’ derives from Sanskrit and means to join or to unite, symbolizing the union of body and consciousness.
As found in our Vedas,

Today it is practiced in various forms around the world and continues to grow in popularity. Recognizing its universal appeal, on 11 December 2014, the United Nations proclaimed 21 June as the International Day of Yoga.
On the fifth International Yoga Day, Doordarshan Yadagiri conducted the special quiz program in which Gurukul Hyderabad -Day school boys ranked third in the competition.

Kudos to our esteemed parents, Yoga Instructor, Gurukulites & entire teaching fraternity who helped our grade VIII students Master Bala Aditya and Master Nayan Patalay who outperformed in the competition and won the trophy which was judged by Mr Surendra Nath, the General secretary of Hyderabad Yoga Association and Mr Dattatreya Rao, the Organising Secretary of Telangana Yoga Association and National Referee.

In Swaminarayan Gurukul, our team focuses on holistic development of a child through multiple modes like academic, spiritual, sports, motivational & many more. Gurukul’s school assembly is planned in such a way to incorporate meditation which boosts self-confidence, concentration & discipline of the students throughout their school journey in Gurukul.
Hence its rightly quoted,

“YOGA IS THE JOURNEY OF THE SELF, TO THE SELF, THROUGH THE SELF”
Let the legacy of Gurukulites fly sky high!
Share on