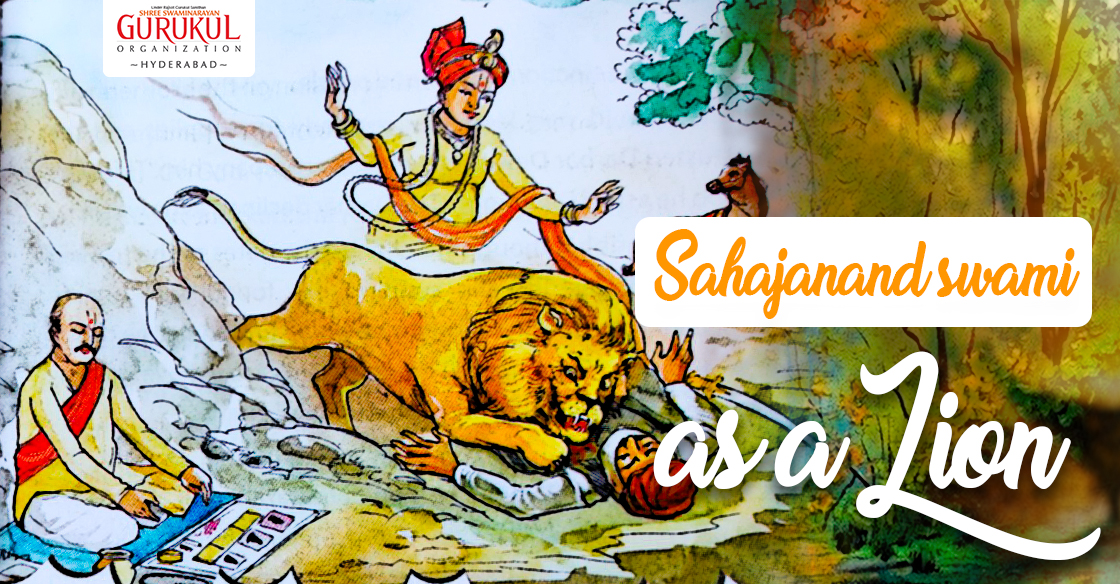 God is always merciful, but he waits and tests his devotees.

Let’s see at a glimpse of a devotee’s life that how Bhagwan Swaminarayan has tested him and protected his beloved devotee named Sundarji Bhai Soni.

Sundarji Bhai was a staunch devotee of Bhagawan Swaminarayan and was an honest & respected jeweler from Meghpur village(Gujarat); he used to get gold and precious ornaments from Jamnagar district. Meghpur’s  village population was merely a thousand & everyone had a huge respect towards Sundarji Bhai.

Sundarji Bhai would visit Jamnagar district regularly for the Gold supplies & Darbar Devsinghji would accompany him frequently because the route was  through a dense jungle and risky as dacoits used to rob the people enroute. But this time, Darbar Devsinghji declined as he was ill, but Sundarji Bhai was really in need of supply for his business.

So, before starting the journey towards Jamnagar Sundarji Bhai thought in case, if I have to stay there overnight, better prepare for the journey and then leave my village. Thus, Sundarji Bhai carried his clothes, Pooja bag & home cooked food because a “devotee of Bhagwan Swaminarayan never eats outside food.”

Sundarji Bhai headed towards Jamnagar on the way someone accompanied him & he reached Jamnagar safely & got supplies but by that time it was very late in the evening. So, he halted at the supplier’s house. Early morning Sundarji Bhai finished his morning Pooja and left towards Meghpur village.

He walked non-stop for  three-hours & reached the same dense forest where robberies used to happen. One has to travel almost two miles in the jungle. On the other side of this path there was a river flowing, although the path was very dense and difficult to travel, but Sundarji Bhai being a devotee of Bhagwan Swaminarayan did not fear as he had firm faith & affection towards Bhagwan Swaminarayan.

All of a sudden he heard a noise of horse hooves. By then Sundarji Bhai understood that someone was following him; he was none other than the Robber.

The Robber yelled, with a cruel voice “Hey, you man stop right there.”

The robber blocked the road and asked, “Where are you coming from?

That’s why it has been said that

“ The stronger the Faith, the harder the tests & greater are the rewards.”

The Robber took everything from Sundarji Bhai & then said remember last time whom you want to because after this it will be the END OF YOUR LIFE.

If I leave you alive you may disclose me to the public & the King.

Dear viewers, to understand this Charitra in a better way just Imagine if you are caught in such a situation what will be your Last thought/wish? Will you be Faithful to God OR Fearful from the situation?

Need to Think yourself.

Robber waited for a while & He then took out his sword and swung the sword on the neck of Sundarji Bhai but nothing happened to Sundarji Bhai and Robber was shocked like anything. It was like hitting a bunch of cottons, but still the evil robber couldn’t understand that something miraculous was happening.

The Robber out of anger grabbed the neck of Sunderji Bhai, but how can Bhagwan Swaminarayan let down his devotee by such a robber.

“But all of a sudden the robber heard the shivering roar of a Lion, before the robber could see the Lion. The roaring lion jumped onto the robber & tore off the body of the robber.”

Seeing such a ferocious Lion around Sundarji Bhai jumped into the river. The Lion destroyed the robber in no time. As Sundarji Bhai came out of the river to his surprise he saw Sahajanad Swami out of a Lion.

Sundarji Bhai surprised & rushed towards Bhagwan Swaminarayan and fell at the lotus feet of Maharaj. And prayed Oh! Supreme Godhead you have saved me & proved again that you are the ultimate savior of your devotee.

It is said that “God is never late, but on time.”

Bhagwan Swaminarayan with a charming smile placed his hand on the head of Sundarji Bhai and asked him to ask for a boon. Sundarji Bhai was overjoyed by the divine blessings of Bhagwan Swaminarayan, his eyes filled with tears and love he said, Oh! merciful God, I want nothing else now, you just forever reside in my heart and bless me with your darshan always.

Dear viewers,
This incident teaches us that a true devotee of God wants only God with him and not the materialistic objects!

Sundarji Bhai returned to his home & shared this miraculous incident with his family members & the villagers.
All were shocked and realized that Sahajanad Swami is the Supreme God himself.

Even today there is a Swaminarayan Temple built by Sundarji Bhai in the same Meghpur village which witnessed this charitra.

“Just Believe That When The Best Things Are Going Wrong, GOD Will Always Be There To Make Us Strong Only If We Have Faith In Him”