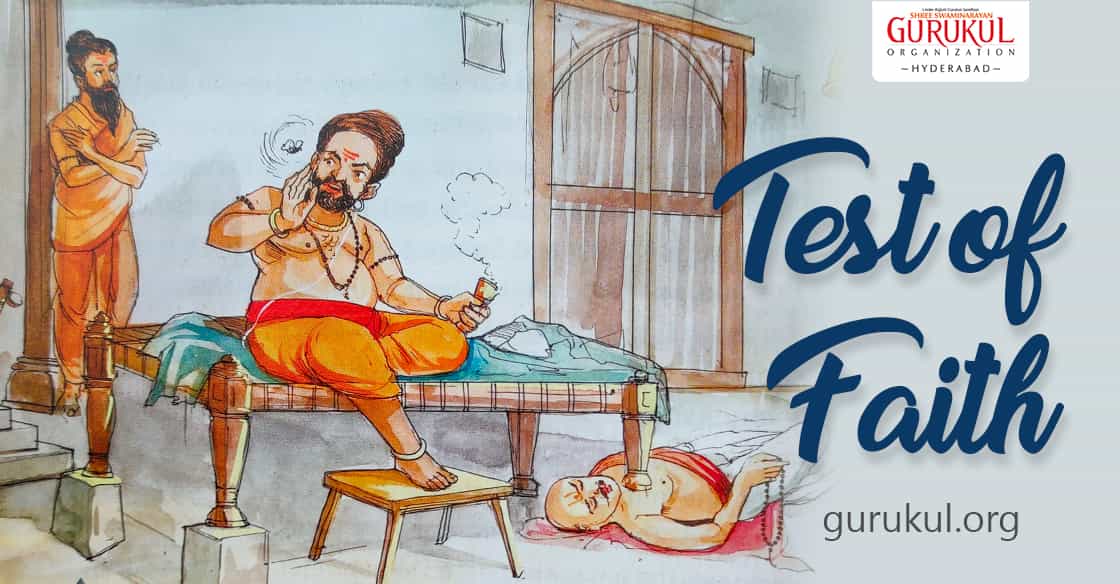 One of the great saints of Bhagwan Swaminarayan Sadguru Gunatitanand swami said, “As eyelids protect our eyes, as hands protect our neck, as a mother protects her child and king protects his empire similarly God is always well set ready to protect his beloved devotees”. As we have seen in the history of the epic spiritual world God has protected Bhakt Prahalad, Dhruv, Draupadi, Mirabai, and many more.

Let’s see one divine example of how Supreme Godhead Bhagwan Swaminarayan had protected his devotee Khima Dobariya. In Gujarat almost eight miles away from the district Amreli there is a place named Pithwajal.

The background of the village is such that there lived a wicked Bawa with a heavy body, big jata on his head, long beard, golden chain in his neck, tilak of ashes on his forehead. His appearance was like a messenger of Yamraj (king of the hell) he was addicted to bad habits such as alcohol, hookah, adultery and so on. Whereas the villagers consider him as God and worship him every day.

We as human beings strive to fill our stomach, strive to get a good name and fame whereas this wicked Bawa was getting all these things with zero effort.

In the meantime, Khima Dobariya was surprised because it seems to be that saints were hungry from a few days and walking barefoot but still they have not yet asked him for food or water.  He felt immensely blessed in his heart to have the darshan of true saints.

That means (Time, Maya, Sins, Deed & Yamraj) cannot do anything to the one who has surrendered to God. Saints explained to him about the Panch Vartman (five sacred vows of a devotee) which needed to be followed till the end of our life. It was late evening the saints left the place and continued their spiritual journey.

As days passed, Khima Bhagat followed Panch vartaman but the belief & the lifestyle of Khima Bhagat was not at all accepted by the wicked Bawa and the villagers.

He softly rejected the proposal made by the wicked Bawa & with the bold voice Bhagat said Swaminarayan Bhagwan is Supreme & Ultimate for me so, at any cost I will not forsake the Satsang.

The very next day wicked Bawa held a gathering of the villagers where he started shouting towards them and said Khima Dobariya has accepted Swaminarayan faith & is living his life according to the guidance of Swaminarayan saints & you all are still quiet.

It’s my command that from today no one will do any kind of communication, any kind of a transaction with Khima Dobariya. If someone is found, he will be thrown out of the village.

It was very difficult for Khima Bhagat to survive in such a situation. The days were bitter and difficult, but still, he had not yet forsaken devotion, faith in Bhagwan Swaminarayan, and Satsang. On the other hand, the wicked Bawa could not tolerate the devotion & faith of Khima Bhagat. Thus wicked Bawa made a cruel plan either to change Khima Bhagat or kill him if he disobeyed his command.

The wicked Bawa called Khima Bhagat and forced him to break his Kanthi to leave Swaminarayan Sect & start following him.

But, still, Khima Bhagat stood strong in his decision.

Out of anger, wicked Bawa took a cruel step. He kept one leg of the cot on the chest of Khima Bhagat and being himself heavy as a buffalo sat on the cot !

If such a situation occurs in our life. What will we do?

This news has been spread into nearby villages & the villagers believe Swaminarayan is the supreme God. He always protects his beloved devotees.

We have seen in this charitra that the wicked Bawa was killed by a poisonous insect. The only reason was that the unforgivable sin he has committed that is harassing a true devotee of God.

So let’s all of us never harass a devotee of God knowingly or unknowingly. Where God is always ready to protect all of us.