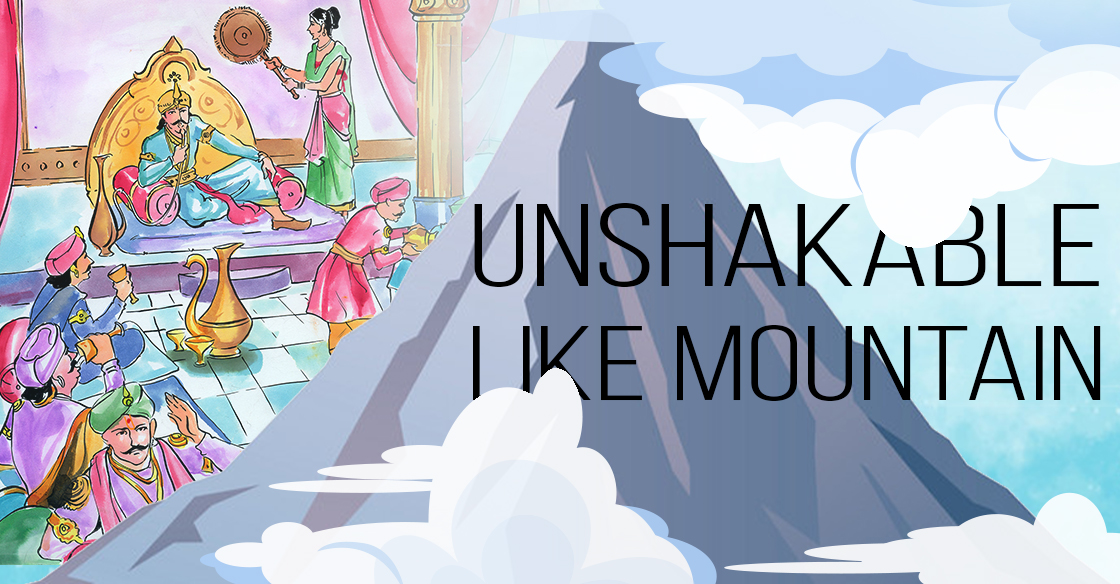 There was a great devotee of Bhagwan Swaminarayan namely Jibhai Darbar, who was the king of Lodhika(Gujarat).

Once, on the day of Ekadashi Jibhai said to Abhaysingh that today is Ekadashi please don’t consume anything except Fruits & falahaar, Abhaysinh replied yes father, as you say I will take falahar only & he left home.

Today Abhaysingh did something different, he shot 3-4 innocent pigeons & cut off their tiny tongues & brought to home & gave to his father as a falahar of Ekadashi, seeing such cruelty & violence of Abhaysingh, his father felt extreme panic but he was helpless!

After a few days, Gopalanand Swami came to nearby the village, so Jibhai went for darshan of Gopalanand Swami, Jibhai did dandvat pranam & then he opened up his heart and shared the situation about his devil-like son, Abhaysingh.

Gopalanand swami consoled him saying that everything will be good soon.

On another hand, at the same time Abhaysingh was chasing a deer in the jungle for hunting, by pursuing that deer Abhaysingh came to the village where Gopalanand Swami was there. He was tired.

To quench his thirst he came to the forum of the village where Gopalanand Swami was preaching to the Jibhai, his father & other devotees.

Jibhai introduced Abhaysingh before Gopalalnand Swami & asked him to bow down at the feet of Gopalanand swami.

Then Swamiji put his hand on Abhay Singh’s head and said “May Abhaysinh surpass his father in staunch devotion.”

From that moment Abhay Singh took the Panch Vartman Diksha(Five fundamental vows of a devotee)  from Gopalalnand Swami & became a staunch devotee of Bhagwan Swaminarayan.

Let’s  Understand the true meaning of “Vartaman” gives overview as

I will follow these Panch Vartman at the cost of my Head. 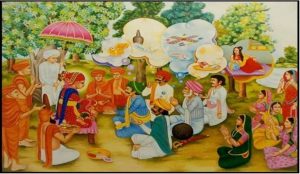 These are the Panch Vartaman the five spiritual disciplines commanded by Bhagwan Swaminarayan for the householder devotees.

A man who was once a  meat eater now became such a devotee who performs pooja for four hours everyday.

Today let’s see how Abhaysingh Darbar stood with the first vartaman of “Not to Drink Alcohol” even in the difficult circumstances.

He was Once invited to the royal court of the King Jamsaheb of Jamnagar on the occasion of the Prince’s wedding ceremony. At the party where everybody was intoxicated in alcohol including the King Jamsaheb. Abhaysingh was just present but didn’t participate in the party. He was not at all interested in drinking alcohol & indulging in intoxication.

Some people were aware of his old habits and offered him alcohol but Abhaysingh denied politely giving the reason of being a devotee of Bhagwan Swaminarayan who doesn’t drink alcohol.

This behavior of Abhaysingh was a bit irritating to the courtiers & there were also a few people who were jealous of Abhaysingh so, they decided to force Abhaysinh to consume alcohol by hook or crook.

They provoked the king (Jamsaheb), “Your Majesty, Abhaysinh has changed nowadays, he no longer likes our company and does not drink alcohol. He will not have it even if you offer it to him.”

Jamsaheb was provoked, he got up and offered Abhaysinh a glass of alcohol, Abhaysingh took the glass & placed it back in the plate.

Abhaysingh said, ”Your Majesty with due respect I accepted your  glass & respecting my beloved God Bhagwan Swaminarayan I put this glass of Alcohol back on the plate.”

Hearing such polite and bold words of Abhaysingh these jealous people once again pinned the King saying that now Abhaysingh is insulting even you, your Majesty! Listening to these words Jamsaheb became so angry & warned Abhaysingh to accept the glass of alcohol. Jamsaheb said Abhaysinh please accept & drink alcohol otherwise it won’t be fare & this is not any warning to you but it’s my order to you.

Now the party became serious. Everybody was thinking that Abhaysingh would drink or deny.

What would you do if you faced this kind of situation?

Would you shout at him OR would you leave the place  OR would you accept it for once & later Atonement(Prayashchit) OR you will not at all accept it. What will you do?

Well let’s see how a Lion like brave devotee Abhaysingh responded to such a   situation.

So now the situation is that King Jamsaheb has ordered Abhaysinh to drink alcohol, now no option left for Abhaysinh.

In olden days people were so crazy that they didn’t even bother about their life if it’s the matter of their honor & insult.

But here, to everyone’s surprise, Abhaysingh bowed down in front of Jamsaheb & surrendered his sword saying that, “Your Majesty ! you take this sword & and behead me and then pour the alcohol as much as you want to pour in my throat, but unless I am alive & there is a kanthi of Bhagwan Swaminarayan in my neck, not even a single drop of alcohol can enter into my neck. I have promised to my beloved God Bhagwan Swaminarayan & my Guru Gopalanand Swami that I will follow Panch Vartman at the cost of my HEAD, so today I am here to pay the cost of my head for that PROMISE your majesty, you can behead me !”

For a moment everybody shocked & just freezed wherever they were, everybody came out of the intoxication

Anyways these words of Abhaysingh made the king more angry,  Jamsaheb took the sword and raised his hand to behead Abhaysingh but Shreeji Maharaj in his divine form blocked Jamsahed’s hand and he could not lower his hand.

This incident shook Jamsaheb and he regained consciousness and realized, why am I not able to shake my hand ? Something is protecting Abhaysinh.

Anyway the sword fell down from the hand of Jamsaheb, he got overwhelmed by the mountain-like unshakable commitment of Abhaysinh. Jamsaheb made Abhaysing stand up & said, “I am so proud of you Abhaysinh, I am so happy that like you devotees of God resides in my kingdom” Saying so, the King embraced Abhaysinh & honor him in front of everyone.

Since that time Abhaysingh’s name was written as a lion-like devotee of Bhagwan Swaminarayan in the history of Swaminarayan Faith.

Abhaysingh didn’t compromise with the Promise of Panch Vartman in such a deadly situation!

If Abhaysingh can DO, we can TOO!